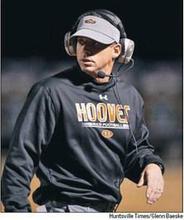 Josh Niblett has his Hoover Bucs back in the Class 6A title game. (Huntsville Times/Glenn Baeske)

Hoover High School seeks the ninth state title (two as Berry High School) in its vaunted program’s history tonight at 7 at Bryant-Denny Stadium in Tuscaloosa.
The Bucs (13-1) are in the Class 6A final for the 11th time in 12 seasons, beginning with Rush Propst’s second season in 2000.

Prattville stands between Hoover placing its hands on a treasured championship trophy from the Alabama High School Athletic Association for the fifth time since 2004. The Lions (11-2) seek their fourth state title since 2004 and their fifth overall championship.

But even with all the repetition, this one’s a little different. There hasn’t been the same disparity in talent since an overachieving Prattville team shocked the Bucs with a 35-21 Super 6 win in 2006.

The Lions were rated the No. 1 team in the country by at least one service this summer. Prattville coach Jamey Dubose said his team already has 17 seniors committed to NCAA FBS programs.

Regional Championship
9:00 am
View All Events