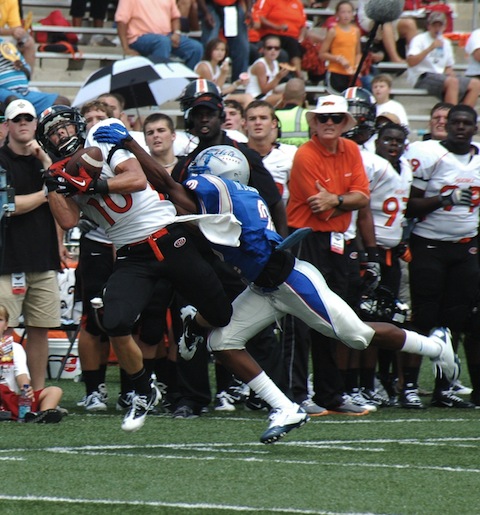 Hoover’s Caleb Sims hauls in a pass behind Byrnes’ Marcus Dillard in the Bucs 14-0 win on Saturday. (For The Birmingham News / Jed Blackwell)

In Saturday’s matchup of two of the most highly-touted high school offenses in the nation, neither the Hoover Bucs or the Byrnes Rebels could muster their usual firepower.

Hoover, however, had just enough.

The Bucs used a stingy defense and a couple of big plays to blank the Rebels 14-0 in the ESPN RISE high school kickoff series. Hoover’s defense held the Rebels offense to just 127 yards, including just 38 yards through the air.

“I’m proud of our team,” said Hoover coach Josh Niblett. “We knew we had pretty good team spped, and we were able to mix things up a little. We controlled the run, which forced them into several 2nd-and-long and 3rd-and-long situations. That freed us up to bring pressure, and we gave them some problems with that.”Hoover’s pressure did indeed give the Rebels problems, sacking Byrnes quarterbacks four times on the day and allowing just six first downs.

Pressure was the key to Hoover’s first score as the Bucs’ special teams came up with a big play. With the Rebels forced into a fourth-and-13 deep in their own territory, a punt snap sailed over Alex Acevedo’s head. Acevedo turned potential disaster into a 5-yard gain, but Hoover took over at the Byrnes 35-yard line midway through the first quarter.

Three plays later, Caleb Sims made the Rebels pay. Running from the Wildcat formation, Sims picked up 30 yards on the drive’s final two carries, scoring from 20 yards out and claiming a 7-0 lead with 3:20 to play in the first quarter.

The drive was one of five trips deep into Rebels territory by the Bucs in the first three quarters, but the only one that yielded points. Despite several opportunities, Hoover couldn’t crack the scoreboard in the wake of Byrnes miscues as the Rebels defense played nearly as well as Hoover’s.

“Offensively, we weren’t as good as we’d like to be,” Niblett said. “Byrnes had a lot to do with that. They have a very good defense, and we failed to capitalize on several opportunities.”

Instead, the Bucs came up with one huge offensive play. Late in the third quarter, Ryan Carter found Jaylon Denson behind the Byrnes defense for a 45-yard score, capping a three-play, 78-yard drive that took just under a minute off the clock and put Hoover in front 14-0 with 2:02 to play in the quarter.

“That was a big play for us,” Niblett said. “That’s what we were looking for.”

Carter finished the game 11-of-25 for 127 yards with one touchdown and one interception. Denson led the Hoover receiving corps with two catches for 55 yards. Justin McArther led Hoover on the ground with 13 carries for 60 yards.

The play energized the Bucs defense, which allowed just one Rebel first down for the remainder of the contest.

“That took some of the pressure off,” said Hoover defensive lineman Tyler Roberts, who finished the game with four tackles. “We knew then that if we just do our jobs, we’d come out on top.”

Roberts said the shutout was something the Bucs had worked hard for.

“It feels great,” he said. “We’ve worked all off-season, all summer. We knew from watching film that we’d be the fastest team they had seen. We just wanted to see all the hard work pay off.”

Byrnes coach Chris Miller said the game would serve as a learning tool for his team.

“We’re just young,” he said. “We lost three great receivers, and we struggled a little bit. That let them take away the run. We just have to bounce back and keep working, and I think our kids will get better and better.”