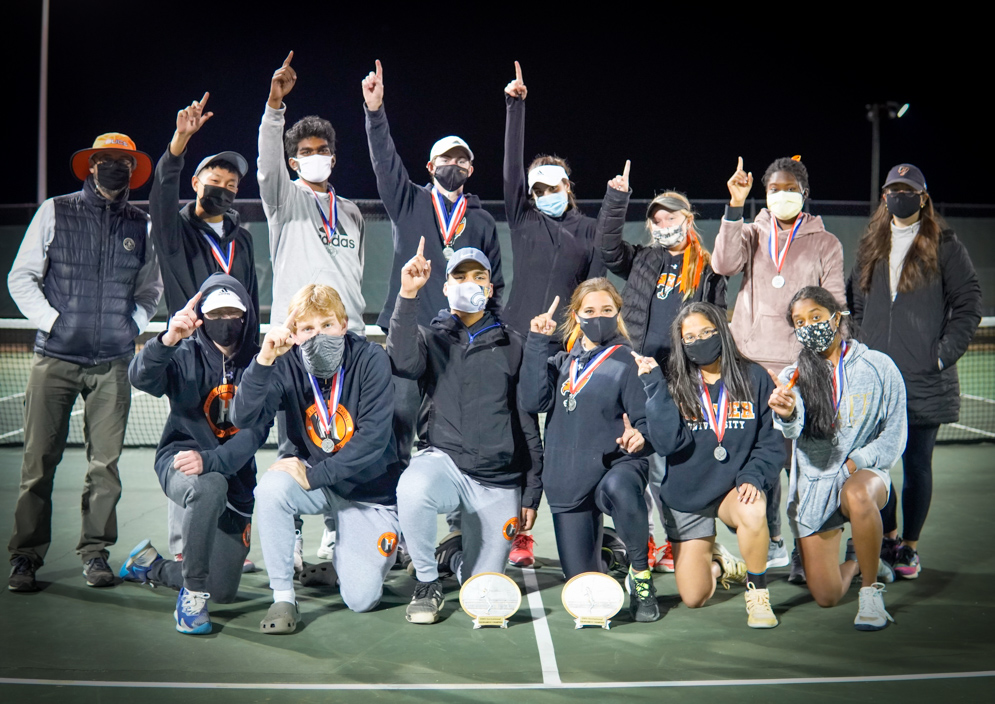 In a long and challenging day of tennis, the Hoover boys took home first place in the Decatur Tennis Tournament on Saturday, March 6th. The tournament started with an 8 game set in doubles. #1 doubles Sam Tolbert and Samuel Sellers took on Russellville and then Northridge to secure their spot in the finals. #2 doubles Andrew Pierson and Isaac Hwangpo had to participate in an extra match due to an uneven bracket, and defeated Deshler, James Clemons, and Decatur to secure their finals spot. Finally, #3 doubles Roshan Chavar and Gavin Patton took on Decatur Heritage and then Decatur to also go into the finals. With all three doubles teams going into the finals, and all three doubles teams ready to face Spain Park, the singles matches for the day began.

#1 Tolbert took on Northridge and then Decatur, and was going to face off against Spain Park in his finals match. #2 Hwangpo first had to face off against James Clemons, and then in his second match played against Spain Park, the second-place team in the overall tournament. Isaac had an exciting comeback and beat Spain park 8-6, and would go up against Deshler in his final match. #3 Sellers also had to shut down Spain Park earlier in his matches, and in his second singles match beat Spain Park with a score of 8-3. #4 Patton had to play three matches to get a spot in the finals, and his very first match was up against Spain Park. He easily shut down Spain Park 8-2 and then won his other two matches as well despite playing several games back to back. #5 Andrew pierson beat both Austin and Deshler to make it to the finals. Finally, #6 Chavar had to beat Spain Park early as well, managed to secure an 8-3 victory, and beat Russellville to make it to the finals.

In the doubles finals, every single team was going up against Spain Park, and they put up a tough fight. Only #1 Tolbert and Sellers were able to secure a doubles bracket win in a tiebreaker with a score of 10-8. The boys fared much better in the singles finals. They went up against a variety of opponents, including James Clemons, Spain Park, and Northridge, but every single boy was able to win his singles final, including Pierson who secured a victory in a tough match against Spain Park with a tiebreaker with a score of 10-7.

Having secured all the singles brackets as well as a doubles bracket, the boys easily won the tournament with a point total of 78, with Spain Park following with a close second place spot with 53 points. The boys play their next game against Oak Mountain in a section match on home courts starting at 2:45 this afternoon.