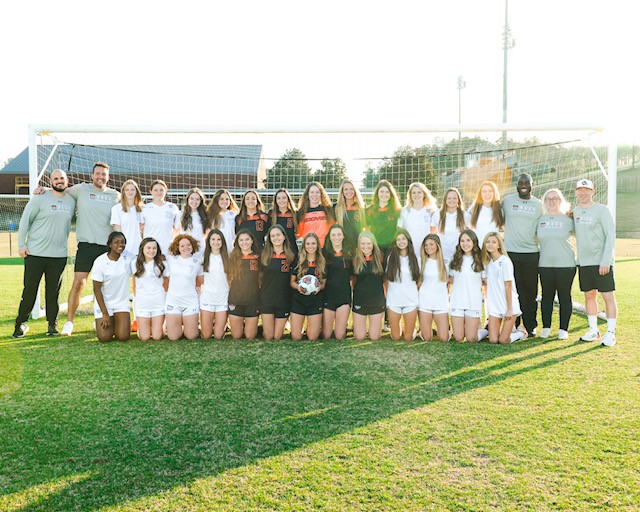 The Hoover Girl’s Varsity soccer team found themselves on the road at Vestavia in the first round of the 7A state playoffs. The Bucs and rebels traded possession with neither team able to establish much offense as the game was primarily played in the center of the field for the first part of the opening half. Eventually the rebels were able to finally get some shots through the Bucs’ defense. These chances were off a pass and shot combo and the second came from a set corner. Junior goalie Anna Markland was equal to the task as she made outstanding saves to deny them both. The Bucs offense finally got rolling as Senior LeAnna Eubanks made a fantastic move, shaking off two rebels defenders and made a beautiful pass/shot that appeared to be going in the far post of the open goal. Regan George was unable to get her foot on the ball and it would’ve surely been a goal as the rebel goalie had misplayed it. Junior defender Ericka Musser made a great defensive tackle to deny a rebels’ scoring chance as Anna picked up the loose ball. The game remained even until a defensive breakdown by the Bucs defense led to a rebel goal with just two minutes left in the half. The first half ended with the Bucs down 1-0 but still very much in the game.
The Bucs defense and midfield expended a lot of energy holding the rebels off as they tried to keep the game close. The rebels were awarded a questionable penalty kick off their throw in and they converted it to increase the lead to 2-0. Anna Markland continued to make acrobatic saves and the Bucs defense tried to hold on but the offense could not get going. The rebels added two more goals and the game ended 4-0.
Although the outcome of the match was not what we had hoped, this season was a success in that this group of players battled through so much adversity and made it to the playoffs. For the graduating seniors; LeAnna, Britton, Corinne, Lauren F., Maya, Kirsten, Sophia, Lauren M., Abigail, thank you for everything you did for the program. It has been my honor to cover this program for the past few years and I will miss it moving forward. Best of luck to next year’s team and as always, Go Bucs!