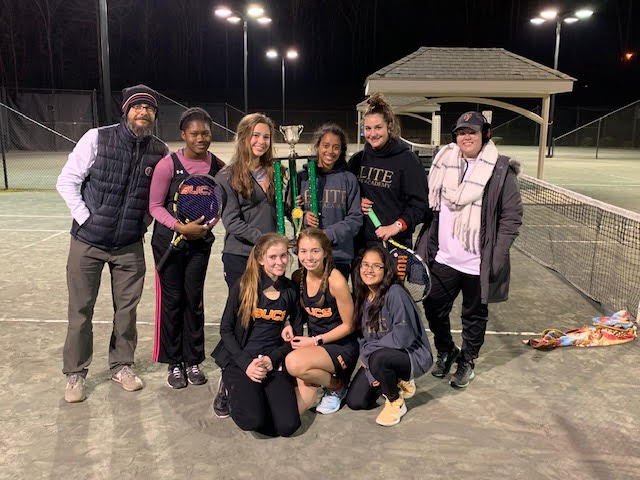 The Hoover High School Girls Tennis Team came in first place at the Frostbite Tournament at Pelham Racquet Club. The day began with the girls playing against Pelham High School. Though it was cold out, and our #1 and #2 seed (Kennedy Ward and Angie Morales) were out to take the ACT, the day started strong with wins in all the doubles matches. Even though all girls were playing at higher brackets, #8 Sowmya Suresh, #7 Sara Lopez, and #6 Arya all had dominating wins, not letting their opponent get more than 1 point.

After their victory against Pelham, the girls took a break before playing against Hartselle. The match, once again, went very quickly despite missing the top two seeds, and the girls secured a 5-0 victory very quickly.

After beating Hartselle, the girls went up against Etowah, who brought a very talented group of players. Having returned back from testing, both Angie and Kennedy were slotted back into the team, and their skill was needed to beat this tough team. #2 doubles seed Emma Burch and Angie Morales won their match with an impressive score of 8-0, while #3 doubles seed Sowyma Suresh and Arya Tamhane won theirs with a score of 8-3. Having dropped the #1 doubles seed match, the girls needed three wins in the singles matches to move forward. After #3 Segen Lister, #5 seed Chinonye Mbanugo, and #6 seed all won their matches with strong scores, the girls secured the win against Etowah.

The long day came to a very exciting conclusion as the girls were set to play Huntsville in the finals. The girls were anticipating a tough match because the Huntsville Boys were winning the entire tournament, but they were prepared to fight until the end. The match started off with 3 losses in the doubles matches. Singles matches began, and the girls were feeling the pressure as they couldn’t drop 2 matches out of the 6 that were to be played. #1 seed Kennedy Ward was able to rise up against this pressure and secure the first victory in the singles matches. Despite having a very painful arm cramp that flared up towards the end of her match, Kennedy won her match with a score of 8-2 and served as the catalyst for what was an amazing comeback for the Hoover Girls Tennis team. With Kennedy’s victory secured, many girls had impressive comebacks in their own matches. #2 Angie Morales was able to secure a win against a very strong opponent. #3 Segen Lister secured the second win for the team and played strong and consistent tennis throughout her entire match. #4 Chinonye Mbanugo was able to overcome the on-serve points and defeat her opponent. Both #4 Emma Burch and #5 Arya Tamhane were up in their matches, but only needing one more to win, Arya Tamhane finished her match and closed out the win for Hoover. Having come back from a score of 0-3 to 5-3, the girls were ecstatic to bring home the first place win for Hoover.

The girls will be playing again against Homewood, Wednesday, Feb. 13 on the home courts starting at 3:30 in the afternoon. Come out to support the bucs!